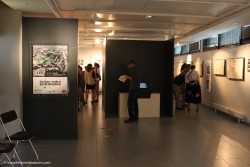 This exhibition gathered source documents and photos from the archives, historical explanations and inhabitants’ testimonies. It has been presented during the European Heritage Days, the 20th and 21th of September 2014, and lasted for several weeks.

This exhibition keeps up with the work began since 2013 by Histoire de Savoir(s) on the heritage and the memory of Faubourg de Béthune, which will continue in 2015 – especially with a campaign aimed at collecting private archives as well as testimonies.