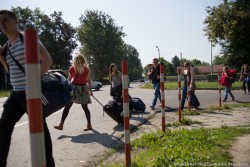 Tuesday, July the 4th, 3:15a.m. We meet at Lille Europe train station to take the shuttle that will bring us to the airport. We, young people from Lille, age 20 to 28, are about to leave for Wroclaw in Poland, to work on youth exchange project that will last 10 days.

The trip aims at gathering 9 French and 9 Poles in order to work on similarities between the towns of Lille and Wroclaw, them being historical, architectural, or being linked to the cultural dynamism. In order to make parallels between their historical evolution, different visual pedagogical tools will be used, such as graphic arts and photography.

At our arrival after a long day of travelling, we were warmly welcomed by our Polish collaborators in a very nice ecological hostel, located not far from the city centre.

The next day, after the general introductions and several animations enabling to set a dynamic frame, we split up in 3 work groups. Participants embodied historians, graphic designers and photographs.

Since this moment, photographs wen to discover the city to take different snaps of Wroclaw, alongside some of the young Poles. Then their work consisted in juxtaposing their photos with the snaps taken at Lille before the trip, in order to select coherent duos of photos.

The “history” group then zooms in past centuries, thanks to Norman Davies’s Microcosm, in order to explore the past of monuments and of photographed sites, the goal being to expose a relevant comparison of the two metropolises’ evolution the last centuries.

Finally, the graphic designers retrieve all the materials created by the two groups, in order to include them into a beautiful chronological fresco. The latter is used as a reference point for visitors while strolling through the final exhibition, that took place at the end of the trip in the headquarters of the French Alliance in Wroclaw.

If the work has been very fruitful, we still had a chance to enjoy our trip to exchange and share through dinners and intercultural evenings, personally very enriching.

The group will also have a chance to be united again during the second round of exchange, that will take place during fall 2013 in Lille, and which will end by the final exhibition at the Gare Saint Sauveur. The exhibition will be inaugurated by Martine Aubry (Lille’s mayor) the day of the twinning of Lille and Wroclaw’s official signature.