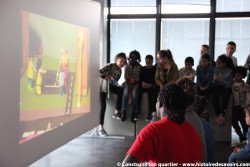 From the 26th to the 31st of October 2015, Histoire de Savoir(s) led the first round of its project “Build your Neighbourhood”. During a week, 8 young schoolboys and girls worked together to make a shirt animated movie on the daily life in their neighbourhood. They shared and created three skits from their daily life, before writing scenarios, dialogue, recording the voices and making the soundtrack, building the model, taking photos and getting involved in the film editing.

These workshops have been led by Histoire de Savoir(s), in collaboration with the association Les Films des Deux Mains, and have taken place at the FLOW, in parallel with the workshops “Outremonde” from the Eolie Songe association – in partnership with the association Perspectives, located at Faubourg de Béthune, acting against school dropout. They have been financed by the city of Lille and the ACSE, in the framework of Politique de la Ville, the Fondation SNCF and the FPH association from Lille.

More information on the project: Build your neighbourhood – video workshops