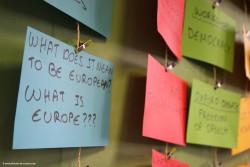 From the 11th to the 19th of April 2015, Histoire de Savoir(s) launched a European training (Training Course – Erasmus+ Programme) about participatory democracy, youth’s involvement in the democratic process, and the rise of far-right and far-left movements in Europe. This training gathered thirty participants from all Europe (Austria, Denmark, Sweden, France, Germany, Greece, Hungary, Italy, Slovakia, the Netherlands, Poland and Great-Britain).

During seven days, participants could benefit from the different activities prepared by the European team of trainers (Tobias Harbsoe, Sarantis Michalopoulos, Blandine Scrève) about the said topics. Hence, several introductions to the democratic process, to dialogue, to critical thinking and media analysis…have been followed by implementations, reflections, sharing…

The richness of the participants’ group and their involvement in their country for an active democracy, an action in favour of the youth…have transformed this week in a unique experience, filled with passionate discussions about Europe, its democratic system, the rise of extremisms that every country faces at different levels… Facing the success of this training, Histoire de Savoir(s) has decided to launch a new training “Rise Up for Democracy” in the summer of 2016, focusing on training to dialogue and on participatory democracy.