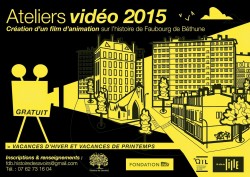 For several years, the association has been involved within the neighbourhood of Faubourg de Béthune in Lille, with the main goal of using visual arts, to bring inhabitants to express themselves on their daily life, as well as to gain skills. Our action is on the long run, with respect to the urban renovation soon to be implemented in the neighbourhood.

In 2015, we proposed the idea of organizing rounds of participatory workshops, mixing the practice of plastic arts and video to the present and past history of the neighbourhood. Each cycle lasts for a week, and aims at letting inhabitants discover their neighbourhood, and bringing them to imagine its future by means of an architectural model and of the creation of a short animated movie. The action is then based on the realisation of an evolutionary model, which is photographed using the method of the pixilisation [1], and then transformed into a short animated movie created by the inhabitants. Hence, it is not about a faithful representation but rather about the subjective vision inhabitants have of their environment, and most of all, the fruit of their ideas and imagination.

This action is thus aimed at gathering a group of 10-15 inhabitants – young and less young – around the project of creating an animated movie, about the topic pf their neighbourhood. It is meant to let them discover animation techniques, to introduce them to these techniques thanks to the involvement of a professional and a host, as well as enabling them to become actors-creators of their own animated movie.

All in all, 3 rounds of workshops are scheduled, hence the creation of three different animated movies which will be presented by the end of the year, opening the way to new opportunities to implement, alongside inhabitants, new projects of artistic expression, about and for the neighbourhood of Faubourg de Béthune.

[1] Pixilation : technique of image processing used in the field of animation, consisting in taking several photos one after the other at very close intervals, of a moving object. When put together, these snapshots have a continuity and give back the movement as if it were a video.